As if misfortune never came alone, the Mobutu regime no longer knew which way to turn when the AFDL rebellion was advancing with giant strides when Mobutu was suffering excruciatingly from prostate cancer. "Abandoned by all. his allies and supporters, Mobutu found himself almost alone to face the rebellion which swore only on the fall of the dictator whose power had made rain and shine. "

It is ultimately Nelson Mandela who will lead the talks with the rebel leader of theAFDL Laurent Desire Kabila to try to save Mobutu. We will remember the negotiations on UTEKA, the South African boat aboard which the talks had taken place under Mandela's meditation, but in vain. " Because Kabila wanted at all costs to oust Mobutu from power ”.

For the record, when Mandela was in prison (for 27 years), Mobutu's Zaire was on the front line for the release of Nelson Mandela and end the apartheid system in South Africa. « Immediately after his release, Mandela will make his very first trip abroad to Zaire. It was in recognition of Mobutu. And this recognition, Mandela expressed it towards Mobutu until the end ». 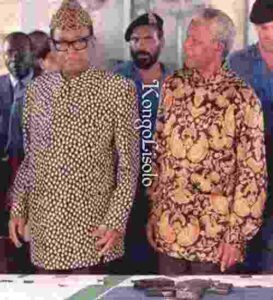