Biblical lies that we do not tell you about: the Bible is inspired by the lies that swarm within it, the list would not even be exhaustive if we quoted them one by one; nonetheless, here are the biggest lies in the Bible just based on the gospel of Jesus Christ, according to John compared to other passages in the Bible

In his spiritual comedy, the apostle John goes so far as to say that God has only one Son and this Son is Jesus Christ, mbut it is false and archi false.

God has billions and billions of children, justAllez read the book of Genesis written by Moses, you can read this: when men began to multiply on the face of the earth and daughters were born to them, the sons of God saw that the daughters of men were beautiful and came down to take them as wives (genesis 1-2).

So, Dear Friends, tell me, Moses speaks of the Sons of God in the plural and not in the singular. Jesus Christ himself said to his discipleship de pray: "Our Father", which want say, in swahili, "Baba Wetu". It is he who gave birth to our spirits, so he is our Papa to all of us, even Satan is the son of God. Reading, the prologue to the book of Job, it is said as: Satan, éwas among the sons of God when they stood before the face of God (Job 1: 6). So, it is clear that the Only Begotten of God of which John speaks exists only in his imagination. May we you call back that this is the Gospel according to him (Jeans).

John's biggest lie is when he allows himself to declare that whoever believes in the Only Begotten will not perish, but will have eternal life; mais the reality on the ground proves just the opposite: what is true, itself John died without having received immortality ( Matthew In 16: 28 ).

A popular saying goes that well-ordered charity begins with oneself. All those who believed in Jesus Christ starting with his mother, his little brothers, his disciples, see even Lazarus (whom Jesus Christ raised) are all dead and are still found underground today.

The proof is that the name of Jesus Christ does not give eternal life. Reason why, in the Democratic Republic of the Congo, the prophet of the liberation of the black man Mfumu Kimbangu had recommended that we read the Bible well to catch the thief. In search of this thief, today we got him: the apostle John. 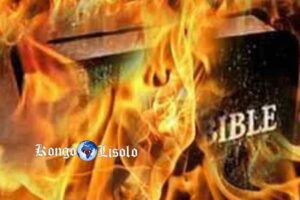