What is the port for, jewel around the waist? Here's the real answer "The paths that lead to the making of an apparent beauty are very often quite varied interpretations and is played only on a thread"

Africa is a continent living around many rites, made of thousands of traditions, built by a story that must be told inescapably to his sons and the world. From the sand of the Maghreb to the mountains of Kenya, from the beauty of the countries of West Africa to the insolent diversity of Cameroon, the wealth of the DRC to the beautiful works of South Africa, people live there and fashions, habits and customs are sometimes used totally differently.

Reason why, it is necessary to eradicate from history, snippets of explanations on certain habits in current practice or less from one end of the continent to another. This is to talk about the wearing of the jewel around the waist.

A jewel by definition, understood as a small object of adornment, precious by the material or the work. Or again, anything elegant rather small.

Necklaces have many functions. They play a protective role, since they were originally used to heal kidney pain. But the role that interests us the most here, is the accessory of seduction. 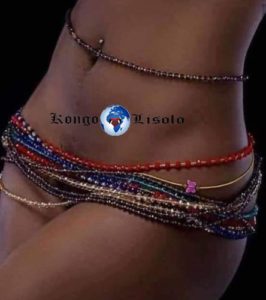