How the enemy destroys the African continent? Africa is destroyed in this way: the enemy begins to destroy education, isolates the valiant and the brave, massacres the geniuses; it formalizes corruption, tribalism, regionalism, the tribal coterie and swindle

Subsequently, he grants privileges to mediocre people who will be in a permanent state of unconsciousness and naivety to notice the maneuvers of the enemy when he operates to destroy our African countries. The unconscious will be more aggressive towards values. Fanaticism becomes an ideology to support mediocrity.

For example, the American ambassador stationed in Kinshasa in the Democratic Republic of Congo Mike Hammer (Aka Nzita) with the director ofUSAID DRC se are traveled to Garamba National Park in Haut province Uele. They are there purportedly to support nature conservation, mBut what is behind it?

It is still curious to see how much the so-called Rangers (park wardens) are mobilized, like valets, to ensure the safety of their white master. Let the conscious Africa see if an African diplomat can do that in America or Asia or Europe and stay in that country. Who is this Congolese ambassador stationed in Washington who would dare to do that to Central Park à New York without being reprimanded, lectured or declared Persona no grateful ? Alas no !

The enemy of Africa loves only traitors who are at the service of the destruction of the continent. Stand up, Congolese people, the plot to destroy the country is in gestation and the unity of the worthy sons of this country will save our your nation. Is this the job of an ambassador? Morality! 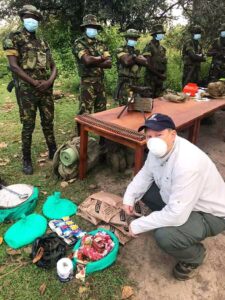 Mike Hammer, US Ambassador to the DRC