Debate: who is this French President who has already married a Negress? Do not dream standing up, the French are not ready to accept a Black / African woman as First Lady at the Élysée Palace, “What have we not seen in the Principality of Monaco ?? "

When he fell under the spell of a Togolese woman, she gave him a child, but the royal family said vehemently: “Niet! " No way ! It is not possible for a Negro to be a Prince in Monaco. And his mother Negress is not entitled to a chapter in our Principality. (...) “You can give money to your Negress and her son. And let them disappear from us. Otherwise we take you away, we challenge you ... And then the European leaders put the Principality in exchange for this union.

This is how the Prince, with his brief shame, reversed his decision and saved his throne by dropping his Togolese Negress, but it is very curious to see how many of the leaders Blacks / Africans drown in a glass of convenience. They are supposed to be the thinking head of this race and fully play their role of guide, but sin by their envy and by omission so as not to lead by example.

No one is against interracial union, but we wonder a lot about the case of our Black / African leaders. Take a tour of Asia and the Middle East, the leaders are identical and authentic to their respective cultures. What about Africa ??

On the contrary, they are obsessed with the Western branches controlling them down to the spinal cord for the interests of the countries from which they originate. Morality! 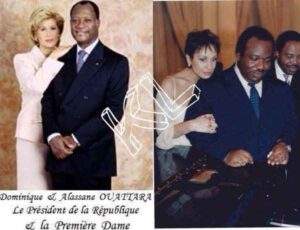 The “African Cup of Nations football” live and in full on KL / Sport: Do not miss the Namibia VS Zambia match, live… (LIVE)