Africa: the strength of the oppressors comes from the oppressed; Blacks / Africans should not complain about being oppressed by Westerners, because the former owe their strength to the latter "Even the dead cannot rest in peace in an oppressed country" By, Fidel Castro

Exactly how long will it take for the Blacks / Africans change their mentalities and stop coaxing their oppressors and torturers? When will blacks / Africans stop being fooled?

Frankly speaking, the Blacks / Africans are the only peoples in the world who reserve a great deal of honor and consideration for their enemies. As an illustration, here is the former British Prime Minister Tony Blair, who wears a ceremonial dress after being named "Supreme Honorary Chief" in the village of Mahera in Sierra Leone in 2007. It's really burlesque.

It's a huge disappointment for Mom Africa : what's the matter with blacks / africans lately ?? Why the leaders Blacks / Africans want to stay asleep on their two laurels while ignoring the history of slavery, colonization and neo-colonialism ?? They set themselves up as masters of stupidity in order to obey their Western masters for several generations ?? Morality! 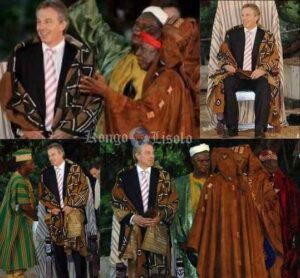