Racism is not civilizational, as the white supremacists maintain; it is both a centuries-old jealousy of the sexual power of melanoderms and a lively fear of being wiped out by the domination of the black genetic character

I do not seek to satisfy humanity, it is not my goal, I am not a universalist - I write for black Africa

"Hard sex" has always been a primary criterion for choosing a companion by the female junta. It is even trite to hear women, publicly, say: I don't care whether he is handsome or gallant, the main thing is that he is good in bed.

Everyone can do their own research, but we will always see that women are attracted to money, seduced by beauty and always loyal to sex. The majority of testimonies made by any women "White, black, yellow ... », Watch that manhood is essential in a man. And the size "of the male sex", most often, required by these women is almost nonexistent in leukoderms. Besides, many slaves "Especially in the Arabian Peninsula" paid the junk break for their connections with the wives of the masters, who forced them to sleep with them, because afterwards, almost all the blacks who arrived in Arabia were castrated. It's not because they were negropnobes and do not want mestizos, because there were blacks everywhere before the slave trade, but because Arab women admired the sexual power of blacks.

By oxidizing, today, we note the phenomenon of mixed couples "Black man-white woman". Some say that black men like Caucasians, I do not disagree. However, it must be recognized that it is women, more generally, who do the legwork. Even during the transatlantic trade, captives were bought out as sex slaves. Most often, when we talk about sex slaves, people don't think only of women. Error ! Western women bought male slaves to make love to them. This is the version of the story which is often hidden carefully.

En oxidant and elsewhere, it is the poor old men and skin, unable to afford a black man, poor, undocumented African emigrants. Found in the nets of old women, who are racist. Racist remarks are very weak coming from young women, because they have the chances to seduce young blacks without even offering money. So so successful in their women cannot be appreciated from them "White men and others. The other reason for racism is their fear of being wiped out by genetic dominance melanoderm. The dominant genetic traits are contained in the black genome. Whites are genetically recessive, if they go into continuous procreation with blacks for only a few generations, they will be erased.

That is why the crossbreeding is against Africa culturally as well as demographically.

The concept of white supremacy is a shield deployed to avoid being invaded "Genetically!" » 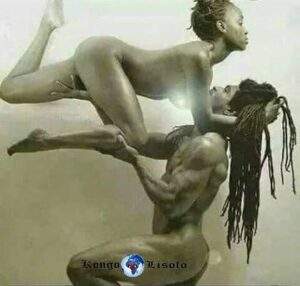