Why should black Africans, so-called Africans, be “blacks”, but not Pacific Islanders (Pacific Islanders); and the Indians? The fundamentally racist term “Negro or Black”, which Europeans began to apply to African blacks (Africans); and Afro-descendants, from the XNUMXth century (after having worked with the natives of Europe and Asia)

Does not usually refer to the natives of Oceania or subcontinent Indian, whose skin is often much darker than that of certain Africans and a fortiori of Afro-descendants. The reason is simple : for Europeans, a "black" is an African, that is to say a slave (Future slave, descendant of slave, potential slave: whatever.) The idea of ​​a black man - which is the basis of racism is fundamentally linked to slavery.


The fact that many Africans and Afro-descendants, out of ignorance, more than two centuries after the abolition of slavery, still refer to themselves as “blacks”, thus integrating the concepts forged by European slavers of the 15th century century, is obviously the supreme stage of mental alienation and slavery. We can deduce from this what the political value of the idea of ​​negritude, carried by intellectuals including racist and colonial France. (left-right combined) has been promoting since the 30s, while affecting to criticize them. We will also draw conclusions about the French newspapers which capitalize the substantive "black" (a black) but never in the substantive "Jew" (a Jew). Thus Le Monde or Liberation.

There are no "blacks" because no one can designate a human being by his color without being racist. Better to talk about black Africans (Africans) and descendants of Africans! 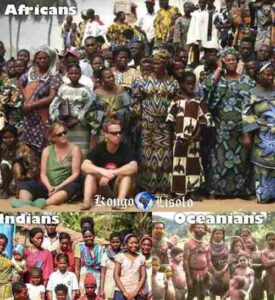