Most important for an insane person who repents; living in his world of alienation and illusions, "A lunatic is like a prisoner out of bars, who walks around blindfolded and hands tied"

It is when we release his sight and unleash him that he finally realizes where he is exactly, that he is free of all movement and all action, and how deplorable his former situation was; this is the essence of the repentance of a lunatic below:

However, I was unaware that the man Black / African is the first man to inhabit the earth.

Since I freed myself, I have discovered that there is no life like the one we live on earth. I decided then to take responsibility for my actions and not blame them on a bearded guy sitting up there on his throne, rewarding others with "Wealth, glory, honor, fame, domination, health, prosperity, peace (...) "; and punishing others with "Poverty, misfortune, misery, wars, disease, underdevelopment, death, curse (...) »

I also do not submit to anyone's will. I live in peace with myself by magnifying my noble ancestors for this very rich and noble heritage that they left me. And for me, " VSthis is the most important! » 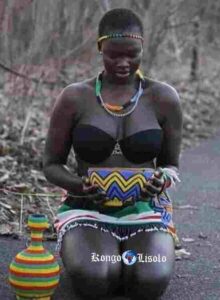