Beyoncé and Africa, the big bluff: the American superstar reuses for his promotion, an image of the Senegalese film “Touki Bouki” without citing its source, nor making any gesture towards the beneficiary… But if his borrowings from African cultural heritage are numerous, the artist remains indifferent to the scenes of the continent

It must be admitted that the photo is beautiful. Beyoncé et Jay Z riding a big bike, a zebu skull on the handlebars. They look towards the horizon, conquerors. It is this image, released on social networks 12 March 2018, which was chosen to announce the next world tour of the couple. Except that, diffused without more explanations, it did not take long to be compared to a sequence of a film of 1973, Touki Bouki, from the Senegalese filmmaker Djibril Diop Mamba © ty.


A masterpiece a priori quite far from the world of billionaires hip-hop, since it is the story of two young Dakarese penniless, a shepherd and a student, trying to flee their country .


One could welcome this "tribute" to a Senegalese film classic, and say that, the notoriety of helping superstars, it will facilitate the nugget to meet a new audience. But the loan, unfulfilled, raises other questions. Firstly, because the rights holder of the director, his son Teemour Diop Mamba © ty, was never consulted before this recovery, as he confided to the journalist Elisabeth Franck-Dumas (release of 12 March 2018). 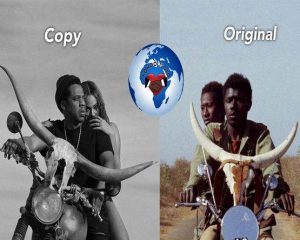