Algerian beauty: Miss Algeria Khadija Ben Hamou 2019, denounces racist violence "Algerians with darker skin are victims of discrimination in the North African state" I will not back down because of the people who criticized me ", said Khadija Ben Hamou at the Algerian news site TSA

The new winner of the beauty contest Miss Algeria has reprimanded critics who had accused him of racial abuse because of the color of her skin. Insults about his dark skin color, nose and lips were made on Facebook and Twitter.

Ms. Ben Hamou, originally from the southern region ofAdrar, was proud of his identity and his victory in the competition.

According to Vogue fashion magazine, she is the second black woman - after Nassima mokadem in 2005 - to win the annual beauty contest.

Debate : why do black women make fun of North Africa?

The beauty in Algeria and other African countries of North-East related to the color of your skin - the more you are white, in the eyes of many inhabitants of the region, the more beautiful you are.

Alors, when Algerians realized that Miss Algeria - who will represent them on the international scene - was black, it was a shock to them! 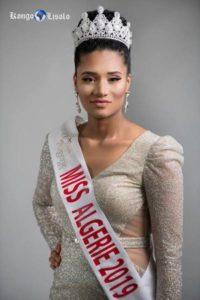