Jeanne Duval: information is incomplete on Jeanne Duval, sometimes also called Jeanne Lever or Jeanne Prosper, but her beauty, her skin color and her origins are known “What is also certain is that she inspired Baudelaire, with which she shared the life, very beautiful poems, perhaps the most beautiful - Exotic perfume, the dancing serpent, the hair ”

It has been said that she was born around 1820, probably in Haiti and more precisely in Jacmel; actress, she performed small roles in Paris in 1838 and 1839 at the Théâtre de la Porte-Saint-Antoine. Jeanne then binds with Nadar. The meeting with Baudelaire took place in the spring of 1842, probably in Faubourg-Montmartre. Jeanne moved to 6 rue de the-headless-woman, in L'Ile-Saint-Louis, very close to the hotel Pimodan where her lover lives.

The story is complicated, but judging from Baudelaire's letters - who sometimes talks about killing himself for her - one can imagine a great love story which, with breakups and reunions, will last at least 17 years. Until 1859, when Jeanne fell ill and remained stricken with hemiplegia. Baudelaire had her hospitalized.

She still lived in Batignolles, greatly diminished, in 1870. We don't know anything more. But there are a few words of love left from his friend: 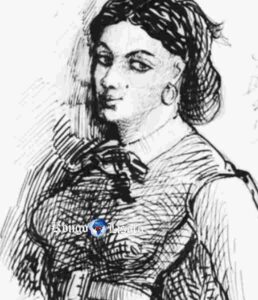