The colonial administration which wanted to forge a typically creationist African conscience: this in order to always and more easily keep under control an African conscience capped by religious fear, as was the case in France during the 1000 years of the Creationist Middle Ages when everyone had to be a Christian

To achieve this, Abdoulaye Gueye explains to us that the colonial administration had not gone by four ways. It was simply limited to funding mission schools (because on a “civilizing” mission) in African colonies and arrange for them to be the only schools available anywhere on the territory.

Indeed, this weapon consists in manufacturing future African philosophers only through seminaries, that is to say the schools where Catholic priests are trained. Gueye cites as proof Jean-Marc Ela et Eboussi Boulaga.

Those are African Catholic priests from these famous seminars that the system will raise to the rank of thinkers, of opinionist to orient the consciousness of all the people and as they are creationists, there is no risk that they will attempt any revolution to remove the invisible chains of slavery that will be brought to the people after the granting of pseudo-independence.

And it works. Since unlike other peoples of the world where it is the illiterate who are the most fervent believers in God, in Africa, it is those who have frequented who will bring God home, to their families. To be a Christian is to be a little more civilized than the others.

This confirms the so-called “Civilizing Mission” which officially motivated the colonization of the allegedly wild and uncultivated Africans by the self-proclaimed “civilized” masters of Europe. It is for this reason that the priests, the Catholic sisters and all the religious who will be unleashed on Africa will bear a funny name: "Missionaries", since they are indeed on a civilizing mission for African barbarians. It is naturally then that the most civilized will continue their studies in France. (...) 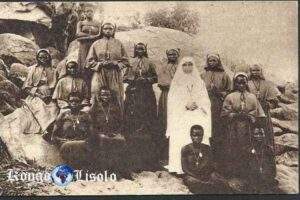