Duty of remembrance: on January 17, 1988 - January 17, 2014, let us be carried away in the momentum to the sources of Etienne Tshisekedi's political courage; he remained equal to himself as an iconic, mythical and charismatic figure and leader; it is because of his strangely enigmatic character and his unparalleled until the endism earned him the nickname of "Sphinx of Limeté"

We are in 1988 in the former Zaire. Mobutu Sese Seko is far from doubting that two years later, under the pressure of both internal and external events, he will be forced to liberalize his sclerotic regime. But, before that, on January 17 of "the year of grace 1988", a Zairian politician is about to make a success of a crazy bet: to have a meeting of a banned political party, theUDPS (International for democracy and social progress), in the heart of Kinshasa at the bridge Kasavubu (Bridge Ngabi).

We must restore the event in the political context of the time. This is marked by a leaden cover on the political universe of the time. The Founding President of MPR reign as a hegemonic master. He has the right to life and death over every Zairian citizen under a terror summed up by an anachronistic formula: « Olinga, olinga te oza na kati ya MPR ”, which means“ Whether you like it or not, you are a member of the MPR (Mouvement popular revolution) of the Founding President Mobutu »Mbut a brave man forbids it at the risk of his life while thwarting the petty traps of security Mobutist around his residence of Limeté. He then entered fully into the political history of Congo-Zaire until this day.

It is there that obviously was born this political courage which will never leave him in his fight for the advent of a rule of law in the heart of the cradle of humanity. He had had by this gesture without dying so to speak, the " Mokako sua des bankoko ”.

Colette Braeckman, in The Dinosaur at p. 334, recounts the event: “January 17, 1988, the anniversary of the death of Patrice Lumumba, Tshisekedi calls a popular rally in the center of Kinshasa, near the bridge Kasa vubu. The army intervenes, causing many deaths and injuries. Tshisekedi is interned in the prison of Makala. To deflect the attention of international opinion, the government invents a new stratagem: psychiatrists from the Center Neuro-Psychopathological declare him mentally "deranged", suffering from paranoia (Editor's note: Dr. Tharcisse Loseke refused to take part in this sham.)

It was indeed necessary to be mad to dare to challenge the absolutism of Mobutu in his own capital! Relegated to IsiroAnd then Dungu, in the northeast of Zaire, finally in the village Ngbandi de Monga, near the Sudanese border, Tshisekedi helplessly witnessed the forced rallying of most of his fellow travelers, who returned to the single party (MPR, Party-State). He pretends to give up the fight, but remains in the country as a symbol of resistance ”.

Whether we love him or not, whether we criticize him or not criticize him, sometimes in view of his fight, the Congolese can sometimes stop to say: thank you for the perseverance, and then go back to criticizing him if they feel like it. Especially since his fight was democratic and the critics were rightly part of it. 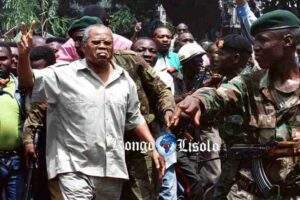