Hope gives life: anyone who loses hope runs the risk of losing his life; but whoever keeps hope ends up earning a living; it is in the darkest night that the stars of the sky sparkle more strongly; and sometimes when we have the impression that the sky is going to fall on our heads that the glimmer of victory begins to dawn at the end of the tunnel

This story can give hope to someone who is desperate as long as they take the trouble to read it to the end:

“One day a farmer's donkey fell into a well. The animal moaned pitifully for hours and the farmer wondered what to do. Eventually he decided the well had to go. The animal being old, it seemed to him no longer of any interest to retrieve the donkey. He therefore called all his neighbors to come and help him close the well on the poor animal.

At first the donkey realized what was going on and started screaming terribly louder. (...). Then, to everyone's amazement, he fell silent. A few shovelfuls later, the farmer looked down the well and was amazed at what he saw. With each shovelful of dirt that fell on him, the donkey would shake it off to get the dirt off its back and climb on it. While the farmer's neighbors continued to shovel on the animal, he shook himself and climbed on it. Finally, everyone was amazed that the animal was out of the well and started to trot. »

Advice and morality of life:

But, you must never forget the rules to be happy:

Be like Saint Francis of Assisi in his simple prayer: "Lord, make months an instrument of your Peace »

O Lord, that I do not seek so much:

Those who win are not those who are strongest or who have a lot of means, but those who never give up. Look to the heights of life and never give up hope. The basket is still circulating. 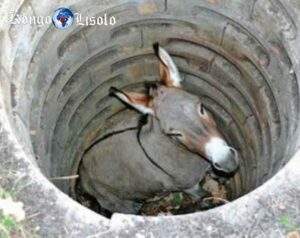