The Host known as the body of Christ is only a simple commercial product which enriches the Vatican and does not deserve the adoration and veneration that Catholic Christians grant it, “It is a surprise to see a factory making this bread that 'is wrongly called (body of Christ; the Lamb of God) who takes away the sin of the world is, however, a piece of bread without yeast; how can he take away sins? "

When we were younger, we were sure that it was God who sent the small pieces of his son's body already prepared to the Pope and that the latter was responsible for distributing them in the different congregations. We have to admit one thing: we were too dumb!

Yet it is a very well organized business that brings billions to the Vatican every year. The worst part is that many people our age have been still dumb until today. If you do not know, it is the poor Christians who buy these communions in a market whose monopoly belongs to the Roman Catholic Church.

Unfortunately, there are fewer of these Christians who wonder about the financial impact of these buns on the global economy. Have you ever participated in a mass where there are not these corpuscles of Christ ?? This Mass does not exist, so this business generates profits every day and even every second. 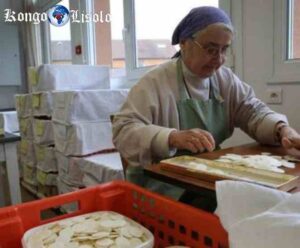