And this is also the source of the constant controversy between blacks / Africans. Since many of them are based on models and systems of thought set up by their “Colonialist and slave masters”; to support their argument.

Frantz Fanon, was he not right when he said: "Let us not pay tribute to adversaries by creating controversies which are inspired by their aspirations. »Strong unfortunately, many blacks / Africans have not yet understood this.

Doing so, how many times have we not heard: “The Negroes Adepts of Universalism”. It is a purely and simply Euro-centrist concept to put forward words like: “You have to have an open mind, you have to integrate, it's globalization (...) »MBut the last straw is that they don't realize that the Black / African man is the one who has always had most open mind of all time. "Its legendary hospitality testifies to it", mBut we can see where it has taken us. And despite all this, the insane Negroes tell us that this is not enough, that we need to open up a lot more or that we must always keep an open mind. In short, that more ideologies and foreign elements are needed. Unfortunately, it is a luxury that we should no longer afford.

What matters is that we have to close in on ourselves for at least 33 years, that is, vigorously reject " Religions Abrahamic, foreign cultures, foreign media and foreign customs ”. In short, it will consist of systematically rejecting all foreign poisons, not to say White poisons and of living in our own paradigm. afro-centric, before reopening to the world later. Otherwise what we have been able to keep from our culture to this day will be lost even more. « It would be an excellent exercise in formatting an entire Black / African people. This is what (the Others) did and we can see how it was beneficial for them ».

To return to the diagram illustrated, the numberings 1, 2, 3, 4, 5, at the level of the intersection of the two paradigms, in fact represent the different stages to be taken to definitively exit the Euro-centrist paradigm: 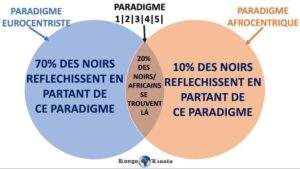