Mechanisms of alienation: what Negroes still fail to understand when they learn that they too are unfortunately alienated from something particular "For example television with Hollywood films, luxurious clothes, luxury cars, Abrahamic religions, leg waxing (…) ”

The final stage being that he has become too dependent on it and until he no longer imagines that there is an outside of it. So that's what makes this Negro insane.

To recapitulate them, we will therefore say that the mechanism of alienation follows five phases:

This is precisely what is illustrated on the pyramid attached to this post!

So whoever stops at the first two steps, that is trying and repeating, cannot yet be considered insane. To return to the example of alienation from the Abrahamic religions (Christianity, Islam and fanaticism very pronounced in favor of Judaism), we will say that the first three phases take place in most Negroes before the age of 10, or even before the age of 5, since they are constrained from the cradle by their parents and without their consent to go to church or mosque or synagogue.

As soon as they are baptized or converted into these religions already from motherhood, their first names are, in addition, signs of this precocious and unwilling indoctrination. So when these Negroes become socially aware, itthat is to say at more than 10 years old, they are already in the fourth and the fifth phase, which is love and addiction. « This is why it becomes very difficult, but not impossible, to extract them from these religions! » 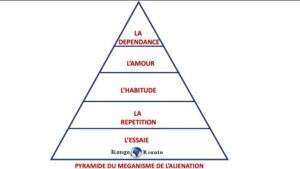