The incredible fate of the princess who became a slave: this story is incredible, but it is true; it is the story of Niama, princess of the Soninké country in Africa, a slave in Mauritius, and finally freed on Bourbon Island

Niama was born around 1734 in the kingdom of Galaam, on the edge of the Senegal River. Her father was King Tonca Niama. The kingdom of Galaam, like the other surrounding kingdoms, lived on two cursed deals: “The traffic in gold, the traffic in slaves”. In the region of Senegal, the kingdoms were perpetually at war with each other. At the mouth of the river, since 1659, the French came to settle on a small island, called Ndjar, where they traded junk for gold and slaves.

In 1743, the war between kingdoms of Senegal was raging. The grandfather of Niama, then King Tonca, was massacred, as well as all the men of his family. Thus Niama was captured. She was only 9 years old. He was locked up in Fort Saint-Joseph, where all the slaves were gathered before their transport to Saint-Louis-du-Senegal. It was from there that they were taken on the slave ships bound for the Caribbean Islands. However, certain cargoes made the tour of Africa, via the Cape of Good Hope, to be unloaded at Île de France or Île Bourbon. Niama was then sold as a slave to Sieur Pierre David, General manager of the "Company of Senegal".

An outstanding scandal arises in the colony.

Jean-Baptiste Geoffroy, the father, died in 1799 in his hut in Basin-Flat, at Rivière d'Abord at the age of 90. Niama left Bourbon to join his son in Port-Louis. She died there on June 12, 1809, at the age of 75. She had never seen her native country, Senegal. Her last two boys died young: Jean-Xavier in 1780 under the flag of the Volunteers of Bourbon at the age of 22 and Louis in 1789, at the age of 31. We don't know what happened to his daughter, Jeanne-Therese. Jean-Baptiste Lislet-Geoffroy died in Mauritius in 1836, a year after the abolition of slavery in that colony. He was 81 years old.

This is the moving story of Niama mixed with pain and worth. Very unfortunately, she left this world without having had the opportunity to see the land of her ancestors again, this very land of Senegal which saw her birth because of those who gave themselves the luxury of enslaving and abusing her. . 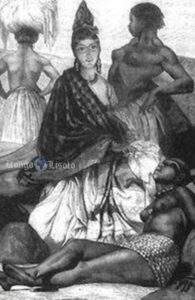