The art of war in the kingdom of Queen Nzinga (Ndongo): although incomplete, the written documentation leaves us with valuable information on the art of war in west-central Africa before colonization

In discussions about the art of war for the general public, Africa is a poor relative. This absence can be reasonably associated with the lack of knowledge of books on the subject in Africa. This situation is different from that of Europe and Asia. In these continents are well known for example the manuals of Clausewitz, Machiavelli or Sun Tzu.

Another explanation concerns the rare African victories against the European colonizing powers. Finally, think of the image of the African black as a brainless brute popularized in previous centuries. She is always to a certain degree always present in the collective unconscious. It does not fit well with that of military strategists, able to surpass the Europeans in this area. Fortunately, honest contemporary testimonials allow us to question this received idea.

A sophisticated art of war has existed in Africa. We will see it here with the case of the kingdom of Ndongo (16th-17th century), located in present-day Angola. He is famous for being led by the famous Nzinga (1583-1663).

The art of war in Ndongo

Elias Alexandre Da Silva Corrêa is a Portuguese expert of the war. He is present in Angola at the end of the XNIXXth century. According to this author of a history of Angola, the art of war in the region had the same effect as that of the Prussian Frederick the Great (18-1712). This remark is particularly flattering. Indeed, Frederick II is one of the models of Carl von Clausewitz author of the military treaty 'De la Guerre'. Frederick II is also the author of great feats during the so-called Seven Years' War. Correa's remarks, probably relevant at the time of the Ndongo kingdom (1786ème-16ème siècle), nevertheless remained a century later.

But a contemporary argument shows the effectiveness of the art of war in Mbundu. According to historian John Thornton, Ndongo's way of fighting was so effective that once there, the Portuguese generals used local tactical and organizational models. According to one of them, the Dutch could not maintain their presence in the region if they did not do the same. But what was Ndongo's military organization, strategies and tactics?

Ndongo had a professional army of a few thousand soldiers, at most between 10 and 20 thousands. In times of emergency, they could be supplemented by reservists whose role was to provide logistical support to professional soldiers.
In addition, professional soldiers were particularly skilled in the handling of small arms at short distances from swords, axes or scimitars, and even clubs. They were also trained to handle the bow and arrow they used at long distances. After the introduction of rifles by the Europeans, they were used to replace the arches.

The Mbundu soldiers began the fight by launching, at long range, one or two arrows or some rifle fire before engaging in the most important part of the battle with short-range weapons.

The Mbundu army was organized in small mobile but cohesive units. Because they spread seemingly disorganized in space, they took up a lot of space. In this way, they gave the impression that the European enemy was more important than he actually was. Moreover, their apparent disorganization was deceiving the European adversary who thought he had to deal with a band of unorganized fighters.

In fact, different tactics were conducted independently by each of the small mobile units. Each was led by a manager. If necessary, they could assemble to answer the orders of a single general. As for their attacks, they typically consisted of small skirmishes before retreating if necessary. Thus, Ndongo's army could frustrate the enemy and reappear perfectly reorganized days later, ready to re-attack. 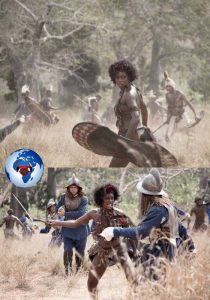