Scarification in Black Africa: a very old tradition dating back at least to the 18th century, scarification (Haabré in Ko language) is a ritual that involves incising the skin using a blade, a stone, a piece of mirror or a sharp knife. Then, the wound is covered with shea butter, juice or ashes of medicinal plants or mud, and the patterns are allowed to form on the skin.

The reasons for initiating this practice are diverse. Initially, she initiated to mark the integration of individuals and to more easily recognize their origins in the black population. It also allowed descendants who were unfortunately enslaved, to recognize each other and to remember their origins when they find themselves far from their land.

Also, recent explanations have revealed from Benin that some families scarify their descendants with the ultimate goal of avoiding slavery since slavers preferred unmutilated bodies.


These marks are made on children, from the age of ten. As a rite of passage, these scarifications are usually accompanied by a ceremony. The meanings are as numerous as the scarifications are diverse. According to their shapes, their dimensions and their positions on a face, it is possible to identify individuals of a given ethnicity, a family or even a social category


Formerly a symbol of personality and differentiation, scarification was a mark of identity proudly worn by certain peoples of Africa. The latter could use it to assert themselves as belonging to such an ethnic group, tribe or hierarchical class. Scarification has always constituted, and in all societies where it was practiced, a fundamental dimension of human culture.

But today, this practice is about to disappear. Indeed, if before, children without scars have long been the subject of mockery in schools. Nowadays, conversely, this tradition is considered a practice, sometimes barbaric, sometimes retrograde, sometimes at risk on the sanitary level. These marks are shameful today. It has been banned in several countries, particularly in Burkina Faso, so that it tends to disappear: the last people who have them today are usually at least 40 and this is the last generation. 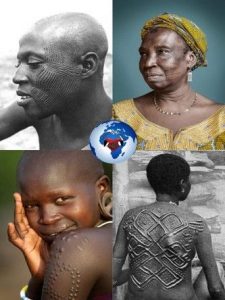