The true meaning of the Versace symbol: To be Kamit (African) is also not to promote alienating ideologies or cultural symbols of other races

The logo Versace symbolizes the "Gorgon": - Gorgons in the Odyssey as monsters of the underworld
(from ancient Greek Γοργόνες / Gorgónes ou Γοργοῖ / Gorgoĩ).


In the singular we have Gorgon or Gorgo (Γοργώ / Gorgố)are, in Greek mythology, fantastic evil creatures whose gaze has the power to petrify people who look at them. The jellyfish is the most famous of the three sisters, and the only one to be deadly. 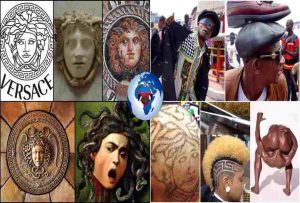 Duty to Remember: Alice Augusta Ball was an African-American chemist who developed the first effective treatment for leprosy, a therapy that saved thousands of lives for many years after her death “Ball was the very first woman and the very first African American to receive an 'MS', a chemistry degree from the University of Hawaii ”

What is baptism for? Does every baptized person know the role of baptism? What changes in the life of a Christian after baptism? What is meaningful for Christians and for society in baptism?

Africa: the strength of the oppressors comes from the oppressed; Blacks / Africans should not complain about being oppressed by Westerners, because the former owe their strength to the latter "Even the dead cannot rest in peace in an oppressed country" By, Fidel Castro