During colonization, Catholic priests worked in close collaboration with magistrates. For certain sins confessed, the priest did not hesitate to go and accuse the confessed. And the magistrate seized him to put him at the disposal of justice. What betrayals ?? However, the priest is bound to keep the secret of confession for all faithful Christians.

Nowhere in the Bible it is mentioned this: "Confession" or "Remission of sins", with a priest or bishop, in a hidden place. 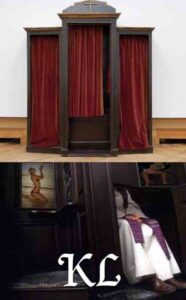