Debate: the Negro monkey - why it is only the Negroes who must ape the Whites? This is what the black monkey looks like; often, they blindly follow the whites in all actions and gestures "This is the height of the Negroid monkey"

To have succeeded in obtaining political independence, many African countries have danced the " Tcha Tcha Tcha Without worrying in the least about their economic independence. As a result, the capital, the means of production and the skilled workforce remained in the hands of Europeans. (Western). And until today, African Presidents behave like genuine employees of Western leaders. Because blacks / Africans work less for their economic independence.

The dependence of West Africa is the logical consequence of this relationship of boss and employee. the IMF( International Monetary Fund) and the World Bank (BM) belong to Westerners, African leaders borrow from them without the ability to repay. And because of the debt rescheduling, African countries are becoming heavily indebted poor countries. Reason why African leaders work for Western leaders.

Moreover, the Continental Organization like the African Union depends more than 65% on Europe. The 54 Black / African States are unable to build a Headquarters. It is therefore China that built this Headquarters. So what good are African leaders if they always have their hand out?  “The hand that gives is always above the one that receives”. 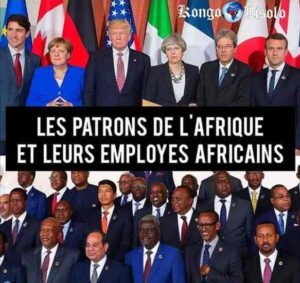