Black / African beauty: Zawditu, the First Empress of an African country internationally recognized by the so-called international community “If the Empress Zawditu is known to have been at the head of the only independent and internationally recognized African country; Zawditu is also the only female monarch of Ethiopia known in history for her noble struggle, that of having significantly helped to abolish slavery in 1923 although her course and short reign were strewn with many pitfalls ”

In 1916, on September 27, a certain Zawditu became Empress of Ethiopia and received the title of “Queen of Queens. This indicated a crucial period in the history of the Ethiopian Empire as well as in the history of all of Africa as she became the first woman to head an internationally recognized state in Africa in the XNUMXth and XNUMXth centuries. centuries. And this, in a context where his country, Ethiopia, did not know colonization.

Empress Zawditu was granted the right to the throne after the death of her father's only son, Emperor Menelik II, when he was still a child. However, upon his father's death in 1913, Lij Iyasu, the son of Zawditu Shewa Regga's half-sister, took power. The period, before Zawditu took the crown, was not easy. The new Emperor saw Zawditu as a threat and ordered that she and her husband be taken out of Ethiopia. This is how the latter went into exile until the nobles ignored Lij Iyasu's reign and ordered Zawditu to become Empress.

Along the way, Zawditu took the crown. She ruled the Empire of Ethiopia from 1916 until April 2, 1930, when she was found dead in her home. While others believe she died of shock at the death of her husband in battle, others suggest she died after suffering from typhoid and a long battle with diabetes.

Although her reign was short, there were milestones that make her a memorable ruler of the Empire. On the one hand, Empress Zawditu succeeded in abolishing slavery in Ethiopia thanks to the help and efforts of the “Rastafari Philosophy” of Ras Tafari Makonnen (Hailé Selassie II), who advocates freedom. Shortly after the abolition of slavery, Empress Zawditu also led Ethiopia into the League of Nations (League of Nations), now the United Nations. Empress Zawditu was a faithful Christian and built several churches in Ethiopia. She helped firmly establish the Ethiopian Orthodox Church in the Empire with the hope that Islam would not be as firmly rooted in Ethiopia as Christianity.

Zawditu's reign was also symbolic because his regent Ras Tafari Makonnen looked after the affairs of the state. Ras Tafari was also made the deemed heir, as none of Empress Zawditu's children survived to take on the role. There was an attempt to remove Ras Tafari from his post as regent, which was unsuccessful.

So Empress Zawditu appointed Ras Tafari as Negus and he effectively became the ruler of Ethiopia at this point. Subsequently, Iyasu staged a coup to regain the throne with the help of his father, Negus Mikael de Wollo. The forces of Empress Zawditu defeated Negus Mikael at the Battle of Segale, and Iyasu left the area. In the process, Iyasu was captured and imprisoned.

Potentially defeated leader, he implored Empress Zawditu for mercy. Furthermore, Empress Zawditu greatly admired British Queen Victoria and adopted many of her methods. However, Empress Zawditu was also a firm believer in the preservation of culture, and she was against the blind modernization of her Empire for fear of suppressing Ethiopian tradition, heritage and culture. Born April 29, 1876 to Emperor Menelik II, then King of Shewa, Zawditu was married at the age of 6 to the then Emperor's son, Emperor Yohanness's son Ras Araya Selassié Yohannes. The marriage was an attempt to rule out all disputes between Zawditu's father and the Empire, but the plan had not worked.

Empress Zawdiitu married 3 times, but did not have children. On her death, she was replaced by Tafari Makonnen who, on becoming Emperor, was renamed Hailé Sélassié. To this day, she remains the only woman to have reigned as Empress of the great sovereign and independent Ethiopian Empire while the rest of Africa was under the yoke of European colonization. 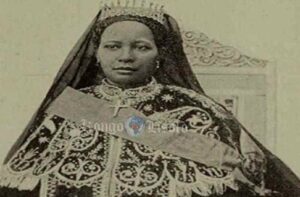 The rite of Kapparot: It is customary to perform the rite of Kapparot (symbolic "Atonement") in preparation for Yom Kippur "This rite is performed by rotating a chicken three times above its head while reciting the appropriate text "